Can a Western filmmaker show anything of truth about the Democratic Republic of Congo? Or do their 'good intentions' only cause destruction and frustration? Three young artists from Goma resist the one-sided reporting that only reflect stereotypical images of war, violence, illness, and poverty — all results of years of Western domination.

Journalist Ley Uwera, photographer Mugabo Baritegera, and filmmaker Bernadette Vivuya struggle to showcase their own experiences of life in Goma where the typical portrait of a non-functioning government along with a helpless population fit into the narrative driven by the 250 Western NGOs that dominate the local economy. Mugabo tries to show the beauty of life in the city while Bernadette attempts to finance a film about her vision of Goma's colonial past. Meanwhile, Ley works for a Western NGO and is constantly caught in an ideological battle to either work for the well-paid Western organization who inserts their own slant on a story or to work as an unpaid freelance reporter with more freedom to air her own opinions.

The question then arises of whether a Western filmmaker can capture anything approaching truth about this complex country. Is the filmmaker part of the 'white savior complex'? Director Joris Postema grapples with these issues as he enters into open confrontations with the three local artists in his own attempt to bring mutual assumptions to the surface. The prejudices provide a deeper insight into the inequality of power that lies under the mechanism of Western imaging.

"Beautiful images and captivating dialogues have made for a fresh approach to a tricky topic. It is a multi-layered film with fantastic characters whom we get to know intimately in the most genuine way...An important contribution to the crucial discussion about Western filmmaking and neocolonialism of the African continent." — Movies That Matter Jury Report

"Story about young artists in Goma fighting against the prevailing Western reporting on war and misery, the film investigates to what extent Western stereotyping is the result of a skewed balance of power. Cinematic dialogue between Western conceptions and the Congolese perception of reality." — IDFA

FILMMAKER'S STATEMENT: "I think the theme of the film is very important. Especially, in a world that’s so interconnected as it at the moment. And I think questions like, ‘Who can tell which story?’ and ‘Can a Western filmmaker say anything meaningful about a local perspective?’ I think these are important questions for filmmakers, but also in general. And I want to thank the crew and characters of the film for pointing out these questions to me. However uncomfortable that has been at times. So thank you, Ganza Buroko, TD Jack Muhindo, Juny Sikabwe, Gaïus Kowene, Mugabo Baritegera, Ley Uwera, Berandette Vivuya, and many others. You’ve brought so many issues to the foreground. And I can only hope that the film will serve as a tool for many more discussions about these topics."
— Joris Postema

Ballad of a Righteous Merchant

Werner Herzog is one of the most celebrated global filmmakers of the past century, responsible for...

AFTER FACT: An Unvarnished Portrait of Real-Life News Work

What does journalism look like when lies trump truth, clicks control the news, and layoffs abound... 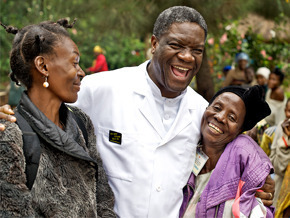 Doctor Mukwege, the Wrath of Hippocrates

Dr. Mukwege, a Congolese gynecologist, who has won many awards including the 2014 European...

The Shadow of Gold

Do you wear a gold ring? Do you know where the gold in that ring comes from?  The Shadow of Gold...