Nuclear Lands: A History of Plutonium

Nuclear Lands examines three areas in the world whose landscapes are dominated by nuclear sites: the US, France and Japan. The film traces the story from the birth of plutonium production in the 40's in Hanford, USA to the nuclear reprocessing plant in La Hague, France and tells of the Rokkasho nuclear site in Japan which is actually built on a seismic fault line.

Based on archives, Nuclear Lands recreates the story of an industrial environment secretly born in arid and desolate locations. The sites, depicted through creative imagery, show us that humankind made an irreversible choice in the mid-twentieth century.

From its evolution as matter used for military purposes to one which is used for nuclear energy, the film explores the scientific, industrial and geopolitical implications of its production. 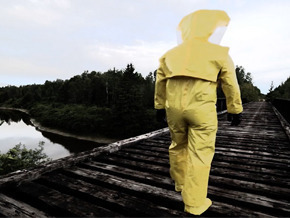 What will Canada do with its enormous stockpile of deadly radioactive waste? Currently, many small...

For decades, agreements like the Nuclear Non-proliferation Treaty have limited the spread of...

Recent international developments are increasing concerns about the possibility of a nuclear...

Of Great Service: The Story of National Research Universal

Of Great Service tells the story of the National Research Universal (NRU) reactor in Chalk River...

Nuclear Apocalypse: How The World Ends

Long after the Cold War, fears of nuclear annihilation persist. The potential for nuclear...