In a world increasingly dominated by humans, three teams of determined conservationists go to extraordinary lengths to save three threatened species in the American heartland. Stunningly photographed in the Grand Canyon and on the American prairie, The Nature Makers follows biologists who’ve deployed helicopters, giant bulldozers and a host of human tools in order to defend nature.

On the Platte River in Nebraska, Brice Krohn leads a team of biologists to scour the river with heavy machinery in order to perform functions that used to be carried out naturally by spring floods in order to maintain a river landscape that can continue to support Sandhill Crane migration as it has for hundreds of thousands of years.

Deep in the Grand Canyon, Brian Healy leads a team of biologists to load the humpback chub, an endangered fish, into barrels and fly them by helicopter into remote tributaries of the Colorado River in a last ditch effort to repopulate them into their native streams lest the species go extinct.

When alerted to an endangered colony of prairie dogs, whose numbers have been greatly reduced due to decades of organized poisonings and intensive land development, Lindsey Sterling Krank leads a team to use construction equipment and industrial tubing to build artificial burrows to rescue them from a gruesome death.

In the 21st century, defending the wild often paradoxically requires technology and aggressive human intervention. The Nature Makers is a moving portrait of passionate people and the extraordinary creatures whose existence they fight for. The film is a story of how we found ourselves on the brink of losing so much of the natural world, yet it charts an optimistic, though unmistakably challenging, path forward.


"A spectacular film and a superb addition to my graduate course in conservation biology and wildlife forensic sciences. Being able to show my students real-world examples of conservationists and wildlife scientists in action was very inspiring for them – they had an overwhelmingly positive response to hearing insights directly from the scientists themselves and the film sparked extensive discussions. Where many nature documentaries leave the viewer feeling discouraged and pessimistic, this one did not – through both effective storytelling highlighting three often-overlooked species and the researchers working to save them, along with beautiful cinematography, it captured not only the frustrations and challenges of the work, but the successes that are possible and the deep connections that humans have with the natural world. I highly recommend this for both undergraduate and graduate students in conservation, ecology and wildlife and fisheries sciences."
— Susan Underkoffler, Program Director, University of Florida Wildlife Forensic Sciences
“Nothing but praise for this three part nature activist documentary...An informative experience showing the work that some humans are doing to protect wildlife populations who are suffering at the destruction to their habitation by the effects of human development...Incredible editing, on all fronts, kept the film moving and breathing and interactive at all parts, enveloping the audience in the nature and emotions of those portrayed on the screen. The sound was spectacular, wholly natural, and the dreamy footage of the cranes still plays in my head weeks later...This stunning, engaging documentary should be seen on the big screen where much of the beauty can be soaked in.This is one I hope becomes widely spread to teach and to show.”
— Christiana Leonardo, studentfilmreviews.org

FILMMAKER'S STATEMENT: "These biologists work heroically, and pretty much thanklessly, often in remote and physically challenging environments, but their efforts are actually paying off. Their work shows that humans can indeed have a profound impact on natural systems, and not all of it is destructive. Aggressive human intervention can be restorative, though admittedly success is almost always tentative and fragile. Welcome to conservation in the age of humans. In the end, I hope this film provokes the audience to reexamine their preconceived ideas about humanity’s relationship with the natural world. Making this film certainly caused me to reexamine mine."
— Scott Saunders

The Map to Paradise

From Executive Producer Martin Sheen, The Map to Paradise is an adventure-filled and...

This feature segment looks at the 2004 decision by the Canadian and United States Governments to...

The Art of Nature Series

Many plants and animals have found ingenious ways to adapt in order to survive in an ever-changing... 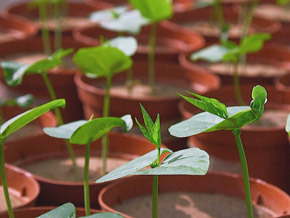 Pollution, global warming, desertification and the consequences of human and industrial activities...