Amy, Casey and Theodore meet an unusual boy who is on his way to his village. The chief has stolen the sun and has absolute power over night and day. The kids and their new friend convince the Chief to play a "riddle" game show, with the winner receiving the gift of the sun. The lesson learned is not to steal. In addition, viewers learn about what the Raven symbolizes for the Haida culture, fun facts about beavers, the Haida Gwaii culture and two original songs from Kimmy Alexander and Douglas Proulx.

Amy’s Mythic Mornings is a fun and innovative animated series for kids 5-8 that teaches problem solving and moral guidance through traditional knowledge from Indigenous storytelling. Six-year-old Amy and her friends Theodore and Casey bring the lessons to life when they imagine themselves in the rich stories told by Amy’s Grandmother. Each episode contains a series of lessons for children to learn, as well as sing-a-longs, and a collection of original songs composed and sung by Kimmy Alexander and Douglas Proulx.

“Raven Steals the Light” is an adaptation of a myth that has been retold by several Indigenous... 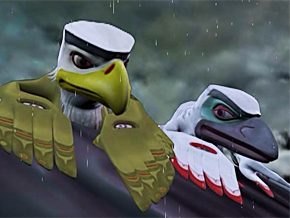 Frog tells Raven about an old man who keeps the light of the world in a box in his hut by the river.

Big Bear and Squeak pick blueberries in the forest on a sunny summer day. They take a break for a...

In “Raven Meets the Little Makers,” Raven has wandered outside of his familiar islands. He...

Kajsa is a 9-year-old girl from the Haida Gwaii nation. She lives in Skidegate, British Columbia...