Amy’s Mythic Mornings is a fun and innovative animated series for kids 5-8 that teaches problem solving and moral guidance through traditional knowledge from Indigenous storytelling. Six-year-old Amy and her friends Theodore and Casey bring the lessons to life when they imagine themselves in the rich stories told by Amy’s Grandmother. Each episode contains a series of lessons for children to learn, as well as sing-a-longs, and a collection of original songs composed and sung by Kimmy Alexander and Douglas Proulx.

Delve into the world of Inuit myths and legends, and the unique culture of Arctic Canada. This...

Legendary Myths is a series of short animated films using the artistic styling of the Pacific West... 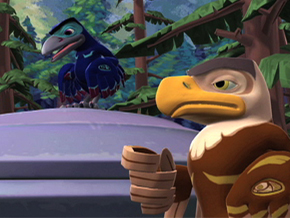 This series follows the adventures of Raven, the most powerful deity of Aboriginal mythology and a...

In a very special tent in the Arctic, Rita Claire and her husky Qimmiq learn new songs, words and...